A purple glow paints the horizon as the sun goes down for the day. A spark of energy is in the air as people of all ages and backgrounds mingle. Then, the chatter of the crowd silences as each group’s name is called to receive their genre. Little by little the crowd disappears and the clock starts counting down. After receiving a line, prop, and genre, the madness begins. 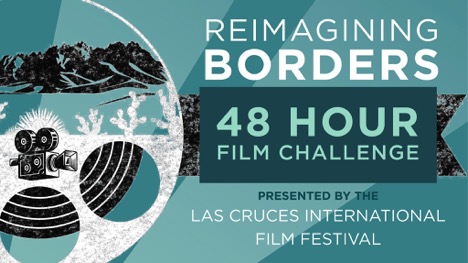 The Reimagining Borders 48-Hour Film Challenge is an annual filmmaking contest sponsored by the Las Cruces International Film Festival. The film challenge requires you to write, shoot, and edit a film in 48 hours after receiving three guidelines: A prop you must include, a line of dialogue, and a genre for each film.

The kickoff and mandatory safety meeting took place on Friday, Feb. 25, at Salud de Mesilla. This year the prop was a broom, the line of dialogue was, “This clearly worked last time,” and a mix of different genres ranging from dramedy to zombie musical.

Ilana Lapid, film professor at NMSU, has been organizing this contest for the past three years. “The Reimagining Borders 48 Hour Film Challenge is an opportunity to support local filmmakers, encourage creativity and foster creative collaboration,” she explains. “There is a lot of local talent in our region that we want to promote and celebrate. I am also very excited that this is an international challenge, which promotes participation from filmmakers in Las Cruces, El Paso and Juarez.”

The 48 Hour Film Challenge is called a challenge for a reason. Lapid describes how limitations and challenges draw out our most creative selves. You don’t have time to overthink things; you must trust your intuition and step into a creative flow. “The inner critic has to get out of the way … The process, while constrictive, can also be creatively liberating,” Lapid says.

“Making a movie requires both mental and physical stamina. The 48 hour film contest prepares you for both.”

Roman Sanchez, an NMSU filmmaking student, explains his experience with the challenge. “The 48 hour film challenge is great for filmmakers just because it’s industry aware, we have to really think on our feet.” He describes resourcefulness and collaboration as key determinants of success. “When you learn those two things, that’s the essence of filmmaking. You’re going to do great things in the future,” Sanchez says.

The films produced are screened as part of the festival at the Allen Theaters Cineport 10 and the winning film is honored at the LCIFF award ceremony on March 5 at the Rio Grande Theater. Sanchez explains how cool it is to see their work on the big screen. “It really humbles you.”

The LCIFF festival started seven years ago and the 48 hour contest started five years ago. Ross Marks is the founder and Executive Director of the Las Cruces International Film Festival. He oversees all the components related to the festival. “It forces great creativity and endurance,” Marks explains. “Making a movie requires both mental and physical stamina. The 48 hour film contest prepares you for both.”