The New Mexico State softball team kicked off its 2018 campaign with a weekend series win against the No. 17 Kentucky Wildcats. The games were a tough opening test for the Aggies as they are trying to build off last season after making the postseason.

In the opening game of the series, New Mexico State’s Nikki Butler got the scoring started when she drove in Rachel Rodriguez on a groundout to the pitcher. The next batter, Victoria Castro, hit a two-RBI single, which scored Fahren Glackin and Kelsey Horton.

The Aggies’ starting pitcher Kayla Green got into a little trouble in the top half of the second inning after a couple of errors by shortstop Rachel Rodriguez. Kentucky was able to score four runs in the inning and take a one-run lead on the Aggies.

The Kentucky lead did not last long. In the bottom half of the inning, the Aggies got RBI hits from Glackin and Horton. The Aggies took the lead 5-4 over the Wildcats. 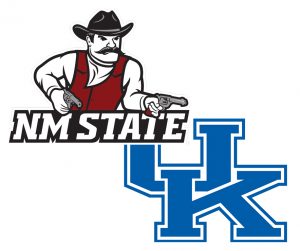 The Aggies had a monster fourth inning, scoring five runs in the frame, including a base-clearing double by pinch hitter Shelby Shultes. The Aggies were also able to get big hits from Butler and Destiny Blueford in the inning.

Analise De La Roca made her collegiate debut on Friday as she came in to relieve Kayla Green in the top half of the fifth inning. De La Roca was able to go for over two innings allowing three runs.

Mikayla Bongi also made her collegiate debut on Friday as she earned the save, pitching the better part of an inning and allowing one run after coming in for De La Roca. New Mexico State took game one over Kentucky by a score of 12-9.

The Aggies got off to a slow start in game two and found themselves trailing Kentucky 4-0 going into the third inning. Kelsey Horton delivered a monster grand slam in the bottom half of the third to tie the game up at four.

The Aggies lost the lead in the fifth inning after allowing a couple of runs to the Wildcats’ potent offense. Victoria Castro led off the bottom half of the inning with a deep home run to center to bring the Aggies within one run. The Aggies were able to regain the lead after a couple of RBI hits from Shultes and Glackin in the inning.

Castro came up again in the bottom half of the sixth inning and blasted another home run to center, scoring Butler. New Mexico State was also able to get an RBI from Rodriguez during the inning.

“I was seeing the ball well. I feel like all of our hitters really attacked the zone, and I felt like it was a team effort tonight,” Castro said after the game on Saturday.

The Aggies held Kentucky to no runs in the top of the seventh and won game two 10-6.

Coach Rodolph appeared pleased with the way her team performed on Saturday. “I’m super excited for our girls. They came out and played hard. Kentucky is an outstanding ball club.”

The New Mexico State Aggies went cold at the plate in game three and struggled in the pitcher’s circle as well. They were able to get a 2-1 lead in the second inning after a Blueford home run. That lead quickly disappeared in the third as Kentucky scored two runs to take a one-run lead, and it was all Kentucky from then on. The Aggies fell in game three 10-2.

“What I’m most proud of is that we didn’t get overwhelmed in the moment and we just stayed calm and played. It showed us what can happen when we stick to an approach and we don’t let the game speed up on us,” Coach Rodolph said after taking two out of three over a nationally ranked opponent.

Kayla Green was able to come out of the weekend with a pair of wins, as Samaria Diaz took a tough loss in game three. Victoria Castro was a key player as she had a team-high seven RBIs over the weekend and also had a pair of home runs. Kelsey Horton also had a big weekend going 5 for 11 at the plate with five RBIs including a grand slam in game two.

The Aggies are getting ready to host the Troy Cox Classic this upcoming weekend, Feb. 16-18. The Aggies’ first game of the tournament is against two-time defending national champions Oklahoma Sooners at the New Mexico State Softball Complex Friday, Feb. 16, at 1:30 p.m.