Alumni, students and local families are expected to visit New Mexico State to see the campus and the annual homecoming parade. 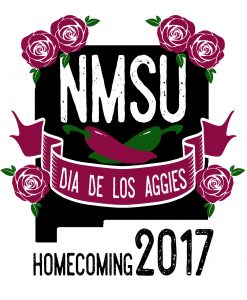 Every year groups of New Mexico State students are given a theme to follow and build a parade float in honor of the alumni who are back in Las Cruces to visit old friends and see the school. These student groups include Greek community students, ROTC students, and other groups on campus who choose to participate.

Last year the theme was the Wizard of Oz, and before that it was the Pink Panther. This year New Mexico State will be honoring a Mexican tradition with the Día de los Muertos holiday theme right before Halloween.

“It’s really fun to be in charge of building one of these floats. You know you’re doing it for the entertainment of others, but it’s also a really good time to come together with a cool group of people and make one of these things. The theme this year is what makes it especially cool. It’s just a really fun theme to work with, making colorful skulls and what not,” said float leader Mason Quinones.

This year there will be nine different groups building floats for Saturday. While they will all center around the same Día de los Muertos theme, they will have different traits, decorations, and a different group dance to go along with the float. Each float will be judged at the halfway mark of the parade route.

Every year there is a winner for best float and dance, which adds a competitive side to the festivity as well.

The parade route starts at the top of University Avenue every year and makes its way down to the bottom of the hill near Knox Hall.

Many alumni make it a point to come back for homecoming at New Mexico State to catch up with their friends and to see the annual parade. Many families from around Las Cruces enjoy coming out to watch the parade as well, and some have even made it a family tradition.

“We love to come out and see what the university is up to every year. We are big Aggie supporters and we have lived in Las Cruces for about 19 years now so we make it a point to take the kids and come see the parade every year when it comes around. It’s a fun family tradition,” said Las Cruces resident Deanna Pautler.

This year the parade is expected to have a very good turnout as NMSU has reportedly had a very high number of alumni already RSVP for the event. Also, the theme has gotten very good reviews from students.

“Being in Las Cruces and knowing how Día de los Muertos is such a big tradition to a lot of people around here, I think this is the best theme New Mexico State has honestly ever done. It means a lot to the people around here and to a lot of the people who are behind building the floats, and it makes it that much more meaningful for all those who come out to see it,” said float builder Mara Elliot.