Ting Ting Alliece Yang Laub, a 21 year-old student majoring in clothing/textiles and fashion merchandising at New Mexico State University, was selected to participate as a designer for the El Paso Fashion Week 2016.

The fashion event was more than just models strutting down a runway; it was Laub’s debut as a fashion designer.

“Ting Ting is very special. We saw her collection at the NMSU fashion show. My brother Robert and I turned to each other and decided we need her for the fashion week 2016,” said Hector Chavez Jr, executive producer of El Paso Fashion Week (EPFW) 2016.

Laub remembers that moment with emotion.

“Right after my finale ended and I went upstairs to clean up my space. I was called down to speak with Robert Chavez and even met Miss El Paso. He said he was impressed with my spring collection and wanted to invite me to participate at EPFW 2016. I was thrilled to be offered a tremendous opportunity,” Laub said.

El Paso Fashion Week 2016 is not just about fashion, but also about promoting the talent of local designers. This was the first time ever that an NMSU student presented her creations.

“We interviewed about 25 designers for EPFW, but only nine were chosen to participate,” Chavez Jr. said. 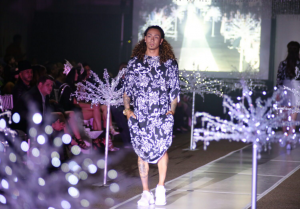 Laub was born in Shihezi, China, but has lived in Albuquerque, NM for most of her life. She said she never imagined being a designer.

“I had not considered a career in fashion, but I was hit with a succession of major life decisions in my senior year of high school. I do not think I made a bad decision choosing fashion as a career. I think fashion is my passion and I really enjoy what I do,” she said.

Her love for fashion comes from her childhood.

“My devotion to fashion was born out of one of my hobbies. When my mom noticed me trying to sew clothes for my dolls and stuffed animals, she took me to sewing lessons,” she recalled.

Laub chose her own themes for her collection, which allows her to express her unique style.

“(The) theme for my 2016 collection was called “Urban Collection” for men and women and it is inspired by street wear, androgyny and a blend of urban and upscale aesthetic. I started sewing for my collection this semester in August. I brought a lot of fabric over the summer that incorporated more color and print in a way that worked well in both menswear and womenswear,” Laub said.

For any younger designer, the ultimate goal is to see his or her creations coming down a runway with bright lights and beautiful models. For Laub, her dream came true when she created pieces and work in the atmosphere of a real fashion show.

“We loved her unisex collection and I feel pretty confident that she will become a very successful fashion designer. She is definitely one of the most talented designers we have worked with. We love to have had her on the show,” Chavez Jr. said.

Lesley Gonzalez, a journalism student at NMSU, attended the EPFW. She said Laub’s talent impressed her. 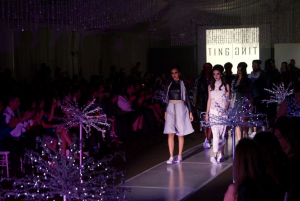 “I am really impressed by Ting Ting’s collections. She is extremely talented. Her designs are very unique. I love her designs. I think she created wonderful designs for EPFW 2016,” Gonzalez said. “I think she stands out from the other designers. She expressed her creativity and enthusiasm to achieve something different, but at the same time very sophisticated.”

“I think her collection is very good. I love her designs she created for both men and women,” Smitley said.

She said she sees Laub as a fashion designer with a promising future in the world of fashion.

Photos and video by Laiza Zaldivar 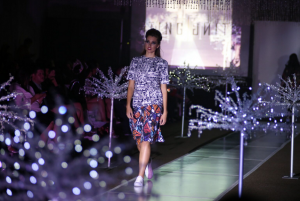 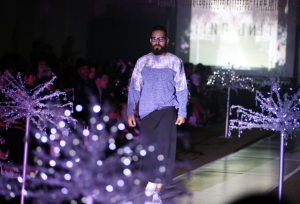