As 2022’s Black History Month comes to an end, it is important to take a look at why we celebrate the month and how it came to be.

Originally established as “Negro History Week” by Carter G. Woodson in 1926, the idea of a yearly celebration of Black culture continued to grow across the United States. Fifty years after its original creation, Negro History Week had evolved into a month devoted to Black history and was officially recognized by President Gerald Ford. 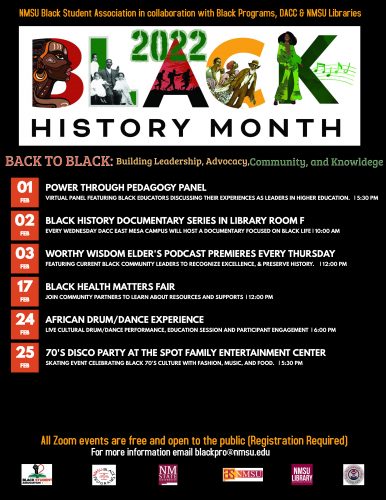 Black History Month is celebrated in February because of two historical birthdays. Abraham Lincoln, the American president instrumental in ending slavery, and Frederick Douglass, a former slave who was hugely influential in the abolitionist movement, were both born in February. Because of this, many African Americans celebrated emancipation during this month, so February was the natural choice for Black History Month.

“February became a very intricate part of being able to talk openly about a lot of the things that have damaged us as a race,” said Lauretta King, an administrative assistant with NMSU Black Programs. “Now it presents a platform to discuss a lot of things that are tearing us apart.”

This February, the theme of Black History month was “Black Health and Wellness,” an important topic as the world continues into its second year of the COVID-19 pandemic.

NMSU’s Black Programs, an organization dedicated to supporting all students, but particularly those who identify as Black or African American, has held six events in honor of Black History month. Due to COVID accommodations, each of these events was held both in person and virtually to include, educate and celebrate as many people as possible.

Kimberly York, interim director of Black Programs at NMSU, says that Black History month should be important to everyone, regardless of race, and that it transcends the simple historical facts children are taught in schools.

“It’s the reflection of the rich heritage and rich legacy; the hard blood, sweat and tears when you think about people like John Lewis and the Black Panthers and their sacrifices, and all that people have done to pave the way,” York said. “But it’s also a time of cultural pride because Black history is American history. And Black history didn’t begin with slavery.”

Lauretta King, who worked in the Civil Rights movement, agrees that there is more to Black history than we often acknowledge. She warns that even though this year’s Black History Month is nearly over, it is vital that we continue to learn about Black history and heritage. This, she says, is the only way to move forward and build a better future.

“History gets watered down over the generations, and it’s allowed to be rewritten,” she said. “And that’s where our damage happens. When you don’t understand the struggle, and you put it behind you, you’re dooming yourself to relive that struggle down the line.”