This year’s mayoral election has turned out to be a crowded race with incumbent Ken Miyagishima seeking his fourth term and former Las Cruces mayor Bill Mattiace also running, along with eight other candidates. 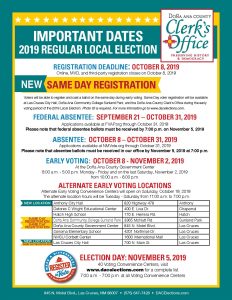 Jorge Sanchez is the youngest person on the ballot at the age of 20 and says he will be the voice of a new generation. He is the owner of a small business in downtown Las Cruces and a realtor with Steinborn and Associates.

Sanchez has been actively sharing his ideas on social media including improving programs within the parks and recreation department and increasing school safety. During his Meet the Candidate interview last month with reporter Jack Nixon, Sanchez said he was interested in increasing educational standards.

Greg Smith is a retired educator and architect who is vacating his seat as city councilor for District 2, which he has held since 2012.

Isabella Solis is currently serving her first term as County Commissioner for District 4. She has expressed concerns about the business climate and rising crime here in Las Cruces. Solis has said she would like the city to partner with federal and state agencies to promote a “reasonable immigration system that honors the rule of law.”

Mike Tellez ran for the state legislature in 2012 as a Republican candidate. He is the founder of a faith-based community center in Las Cruces and says he would invest “in young leaders and cleaning up the streets of drugs and crime.”

Bev Courtney is a previous candidate for city council and Republican candidate for the state legislature in 2018 where she was critical of the city raising its minimum wage. Courtney is also former president of the Las Cruces Tea Party and founder of the American Gun Culture Club. Courtney has stated she is adamantly against government regulation.

Alexander Paige Baca Fresquez is 31 years of age and was born and raised in Las Cruces. During his interview with reporter Jack Nixon, Fresquez stated that as mayor he would think globally and act locally, and would look at making Las Cruces more sustainable. To attract better jobs, Fresquez says he would look at global projects such as partnering with aerospace institutions to clean up orbiting space junk.

Jesusita Dolores Lucero is a former two-term District 2 city councilor and has been a candidate for mayor once before. She is also a recent Doña Ana County Election Advisory Council chairperson and a past president of the New Mexico Municipal League. Lucero says the current budget needs to be reassessed and realocated to bring children and senior programs and parks and recreation to the forefront.

Bill Mattiace served as mayor of Las Cruces from 2003 to 2007 and was a city councilor prior to that. More recently, he served as executive director of the New Mexico Border Authority. During his interview with reporter Jack Nixon, Mattiace said he would help with recruitment of law enforcement to improve the city’s public safety. He stated that crime in Las Cruces is the highest it’s ever been. He also said he would take off the door to his office like he did during his previous terms to promote transparency in government. Mattiace also stated he wanted to make Las Cruces a quality city for keeping and attracting businesses from an economic standpoint.

Incumbent Ken Miyagishima was elected mayor of Las Cruces in 2007. He is a former city councilor and Doña Ana County Commissioner, and is currently also the district sales manager for Farmers Insurance. Miyagishima stated he would still like to work on developing areas such as Solano Drive, El Paseo and the land purchased across from Mountain View Medical Center. Regarding jobs, Miyagishima stated that Virgin Galactic and New Mexico State University were great assets.

Gina Ortega is co-owner of La Fiesta Bakery, which closed recently due to the Valley Drive construction, or “destruction” as she called it, during her interview with reporter Jack Nixon. She has run for mayor once before and vows to make the city more hospitable for small businesses and to lower electricity rates.

Early voting closed Nov. 2, but polls will be open Tuesday, Nov. 5, from 7 a.m. to 7 p.m. at locations throughout the county. A complete list of voting locations can be found at www.dacelections.com.

This year, ranked choice voting will be used on the ballot, which will allow voters to rank the mayoral candidates in order of preference from first through 10th.

Voters may view the the Las Cruces Mayoral Forum online, which featured a moderated discussion with all 10 candidates. The discussion aired Oct. 10 on KRWG-TV.

An audio recording of Jack Nixon’s “Meet the Candidate” interviews with all participating mayoral candidates is also available online.