On the last week of voter registration, Claudia Perea, a 45-year-old housewife from Las Cruces, goes door-to-door in neighborhoods with the largest numbers of eligible Latinos who are not registered to vote.

Armed with a pen, voter registration forms and a clipboard, Perea took to the streets of Las Cruces and El Paso to register Latinos to vote in the 2016 presidential election.

Perea is part of a voter registration drive conducted by the Hillary for Las Cruces organizing office.

“I help to recruit people to register to vote and target the Latino community heavily. I go door-to-door or to churches, parks and neighborhoods to try to register as many Latinos to vote as possible by Oct. 11. My hope is that by doing it, they will head to the polls to vote for the next U.S. president,” Perea said.

According to a study from the Pew Research Center, a record 27.3 million Latinos will be eligible to vote in the 2016 election.

However, Latino voter registration has increased only slightly compared to the growth of the Hispanic population in the country.

According to “Latino Voter Registration Dilemma,” a report published this year by the Center for Latin American, Caribbean and Latino Studies (CLACLS), voter registration rates among Latinos remained steady at 58 percent of potential voters between the 1992 and 2012 presidential elections, regardless of well-publicized voter registration drives.

Perea is convinced that Latinos can make a big difference in the presidential election this year.

“The future of our country is in the hands of millions of eligible Latino voters. They just have to go and vote,” Perea said.

However, the CLACLS report suggests there is no reason to believe that the percentage of registered Latino voters will increase more than other racial or ethnic groups by 2016.

To reach that segment of the Latino population is crucial for Perea.

“I consider youthfulness as one of the important qualities of the Latino population. A large number of Latinos are becoming eligible to vote over the years, and it is this quality that is not being reached to its fullest potential,” Perea said.

“I know the statistics are going to change because there are more Latinos registered to vote in this presidential election since Hillary is making such a big push to increase the Latino registration rates,” Perea said.

Perea said the last time she volunteered for other presidential elections, she noticed many Latinos could not understand the main purpose in registering to vote and they didn’t know how or where to cast their vote.

Even if Hispanic voter registration increases this year, however, there’s no guarantee that voters will turn out.

“I am registered to vote, but I am not sure if I am going to cast my vote,” said Sylvia Magallanes, a New Mexico State University environmental service worker. “I am still undecided because I do not see a good candidate in anyone running to be the next president of the U.S.”

Magallanes said since she was a child her father taught her the importance of registering to vote.

As a mother herself, she tried to teach her kids the importance of voting, but now she is debating whether she should vote at all.

Historically, Latino male turnout has been much lower than its female counterpart. The CLALS report states that Latinas voted at a rate of 49.2 percent compared to only 44 percent among Latino males in the 25 to 44-year-old category.

Magallanes said it is a sad election because she feels that politicians are liars and untrustworthy.

“I think deciding between Donald Trump or Hillary Clinton is hard because both have pros and cons. In my opinion voting for Hillary is not the best choice, but the other option is much more unfavorable for our country,” Magellan’s said. “I am not excited about this election.” 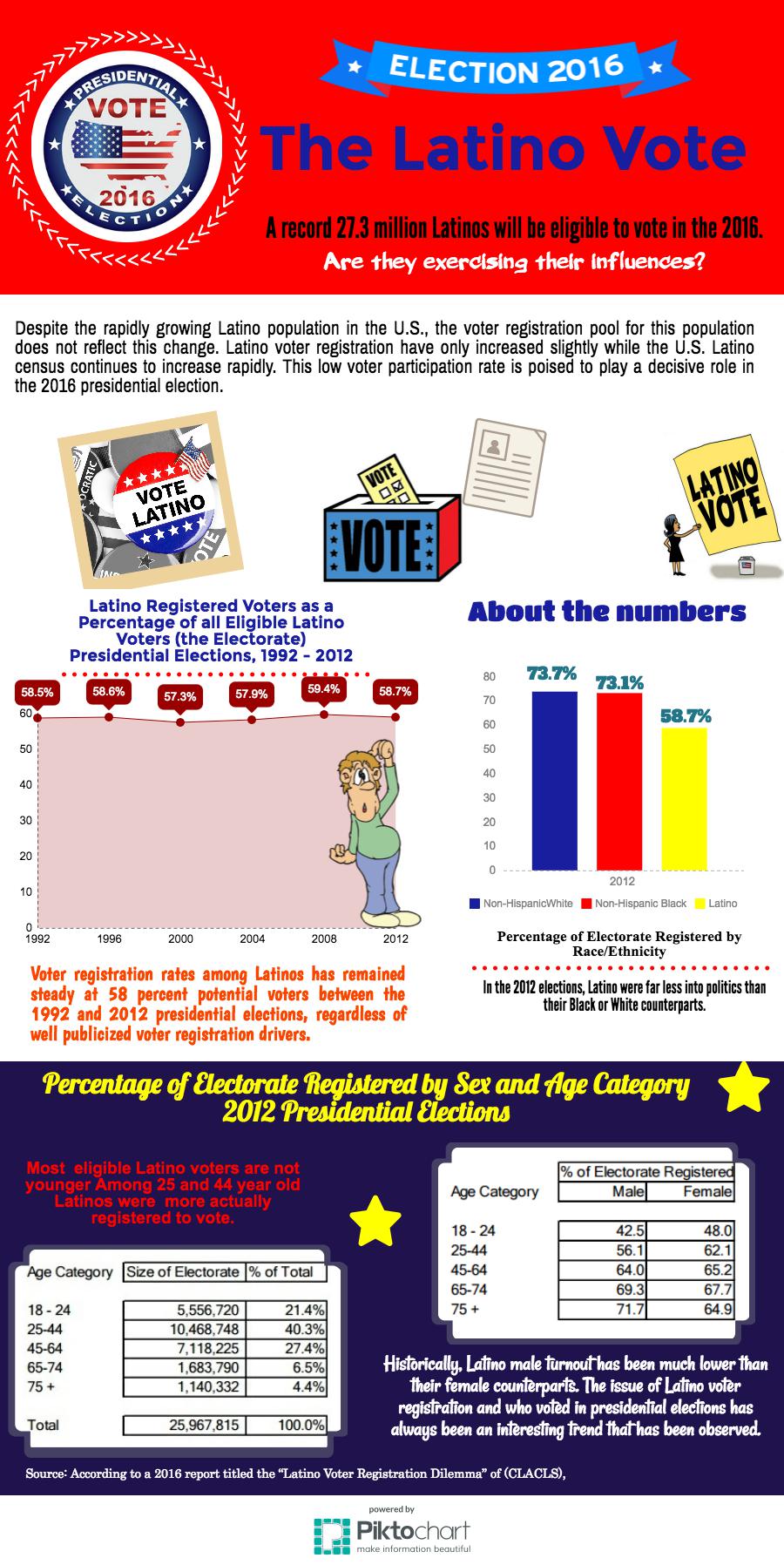 This story is part of  Election 2016 Latino Vote, a series in partnership with New Mexico in Depth, UTEP’s Borderzine and NMSU’s Kokopelli-nmsu.com