OUTober is a series of events put on by the university’s LGBT+ Programs office. The events are aimed at fostering discussion about gender and sexuality and celebrating LGBT identities.

Director of LGBT programs, Zooey Sophia Pook, said the department hosts OUTober because “it highlights the voices of an underrepresented group and promotes community at NMSU.” 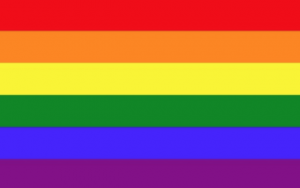 The speakers are meant to showcase a variety of identities and lifestyles, and so are chosen with “student input and a consideration of the diversity of our community,” Pook said.

“[OUTober] is meant to promote the visibility of the LGBT community so that everyone can see different components of the LGBT community. We want people to see that we’re just as much a part of campus as all the other groups on campus,” said Vibianno Gonzalez, co-president of AgGays and the Gender Diverse Aggies.

On this month’s agenda are speakers Ty Turner and Dr. Gayle Salamon, as well as the annual Halloween drag show.

“Visibility is extremely important in creating education and tolerance and inclusive spaces on campus. The visibility of the LGBT community, whether it be through events or student groups, directly affects how we see ourselves and how others see us.”

Ty Turner is a YouTube personality who is known for openly speaking about his gender transition and about transgender issues. He will be giving a talk on coming out and LGBT+ identity on Wednesday, Oct. 11, at 7 p.m. in the Corbett Center ballroom.

Gayle Salamon is an associate professor of English and gender and sexuality studies at Princeton University. She will be speaking on her latest research on LGBT+ identity on Friday, Oct. 27, at 3 p.m. in the Corbett Center auditorium.

The final event of OUTober, the Halloween drag show, will be on Monday, Oct. 30, at 7 p.m. in the Corbett Center auditorium. Hosting the show, which Gonzalez referred to as “the biggest event of the fall,” is a Los Angeles-based drag king, Spacee Kadet. The show will also feature performances by local drag queens.

“This event really packs the house. We usually fill all the seats and have students standing all across the auditorium,” Gonzalez said.

Gonzalez believes the drag show is so popular because “it’s always easier to peek into a community when it’s entertaining. “

“Drag has been super important to the LGBT community because it’s given us that platform. It’s so much fun for everyone else to see because it’s the exciting, different part that society never gets to see of us,” Gonzalez said.

Madison Marino, an AgGays member who attended the drag show and saw one of the speakers during last year’s OUTober, encourages others to attend at least one event.

“OUTober is just really fun and really diverse in what it has to offer, from drag shows to the not-so-flamboyant speakers. They really market to everybody on campus,” Marino said.

Marino believes the visibility that OUTober offers is important.

“Since we exist, we deserve to exist in every level of life — whether that’s in TV shows or in on-campus events. We exist, therefore we have different needs and different ideas that should be shared,” Marino said.

Gonzalez elaborated on the impact visibility can have.

“Visibility is extremely important in creating education and tolerance and inclusive spaces on campus. The visibility of the LGBT community, whether it be through events or student groups, directly affects how we see ourselves and how others see us,” Gonzalez said.

“Seeing people get involved and going to these events makes me feel recognized in my own identity. It makes me feel as though the campus is open to who I am, so I feel like I don’t have to hide or be ashamed of that,” Marino said.

For more information and updates on this year’s OUTober events, or any other LGBT themed events, visit the NMSU AgGays Facebook page or visit the LGBT+ Programs office on campus.