LAS VEGAS — The New Mexico State women’s basketball team took care of business in overtime against the University of Missouri-Kansas City in a WAC Tournament semifinal game Friday afternoon. The Aggies outscored the Kangaroos 90-81 in a highly contested match.

“It was a heck of a ball game played by both teams,” said New Mexico State women’s basketball head coach Brook Atkinson. “Every last one of our kids, whether they played or not, they contributed.”

Gia Pack was a key factor in the Aggies’ win over UMKC. Pack scored 36 points including back-to-back threes to begin the overtime period. Aggie senior Brooke Salas scored 12 points and moved up to sixth place on the WAC all-time scoring leaderboard.

“It’s definitely been an amazing journey, and I’m very thankful that I came to New Mexico State,” Salas said. “I’m thankful for the teammates and the coaches. It’s been really good.”

It was a back-and-forth match between the ‘Roos and Aggies with 14 lead changes and a tie score 18 different times.

New Mexico State didn’t perform well in the first quarter. The team gave up 23 points to its own 19. UMKC was only up 20-19 with less than 10 seconds remaining in the period, but UMKC’s Emily Ivory scored a long-range three to extend the lead.

The second quarter was a different story. The Aggies clawed back up in the scoring column to tie it up at the half 37-37. Not an ideal start for NMSU, but the women never gave up.

Both periods in the second half ended with ties. Each team scored 23 and 15 in the third and fourth respectively. At the end of regulation, both teams were tied at 75.

“We have to punch back,” Atkinson said. “We have to be the tougher basketball team.”

The overtime period got off to a great start for the Aggies. Gia Pack made two back-to-back threes after only hitting one earlier in the game. The Aggies outscored the ‘Roos 16-5 in overtime. 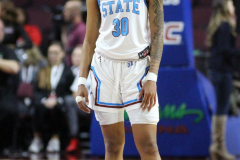 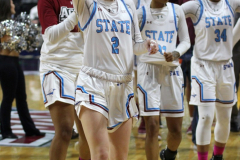 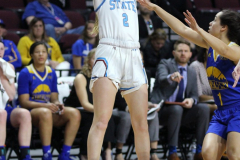 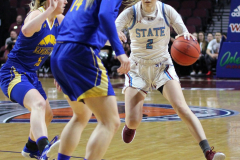 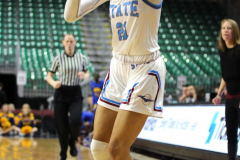 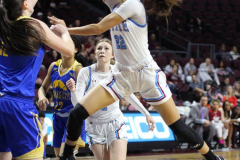 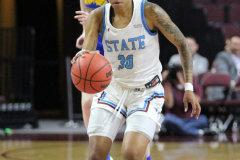