NMSU scored 90 points in the first game of the tournament at Orleans Arena Wednesday. The Aggies will advance to the semifinals after showcasing their defensive abilities with 33 forced turnovers.

“We gave up 20 points in the first quarter and that’s not necessarily something that we like to do,” said Aggies head coach Brooke Atkinson. “[Chicago State] ended up shooting 40 percent from the game when they were shooting 60 in the first half.”

The Aggies (24-6, 15-1 WAC) were slow to begin the first quarter of the matchup. New Mexico State scored first, but foul trouble early allowed Chicago State (2-27, 2-14 WAC) to take the lead. CSU held the lead for just over a minute until the Aggies snatched it back for the rest of the contest.

New Mexico State didn’t fair well on the defensive side in the first. NMSU stepped up on defense in the second, only allowing 14 points. The Aggies didn’t take as many shots in the first half, but they shot above the 50 percent mark. By halftime, New Mexico State led 55-34.

As the old saying goes, “defense wins championships.” And it was all defense for the Aggies in the second half. In the third frame, CSU squeezed in a mere 12 points. New Mexico State continued to roll on the offensive end to the tune of 26 points. NMSU made 12 of 20 in the third quarter to extend its lead 81-46.

Atkinson subbed out WAC Player of the Year Brooke Salas and Gia Pack in the fourth quarter with a 35-point lead. The fourth quarter didn’t result in much for either team, with a total of 17 points. A frame filled with subs defined the final quarter as No. 1 New Mexico State defeated No. 8 Chicago State 90-54.

Up next for the NMSU women’s team: No. 4 University of Missouri-Kansas City in a semifinals matchup Friday at 12 p.m. PST. 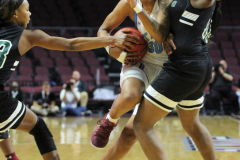 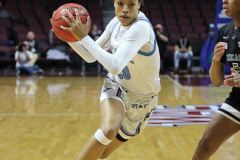 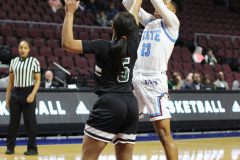 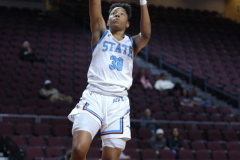 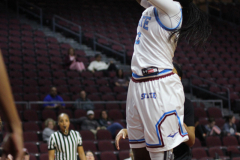