Gun violence is cited as the third most important issue on voters’ minds, with 46% saying it’s “extremely important,” according to a recent Politico-Harvard survey. The concern around gun control stems from recurring officer-involved shootings, armed robberies and mass shootings, which have resulted in an increase in firearm-related deaths across the nation including the state of New Mexico.  According to Education Week, an organization that tracks school shootings, there were 27 school shootings recorded in the country during the first five months of 2022.

Under federal law, background checks must be conducted before an individual can purchase a firearm from a licensed firearm dealer, however, states have their own protocols in regard to private gun distribution. If Republicans take majority control of Congress, any progress on gun control that has been made in recent years is more likely to be rolled back.

In the United States, many states use an FBI system provided by the National Instant Criminal Background Check System to do instant computerized background checks on gun transfers and private sales. The NICS replaced the mandatory five-day waiting period established under the Brady Act, which was signed into law by President Bill Clinton and went into effect in 1994.

The Brady Act was named after Jim Brady, who survived a bullet to the head when President Ronald Reagan was nearly assassinated in 1981. The bill, which was first introduced in 1988, was meant to make sure firearms do not land in the wrong hands by mandating federal background checks and a mandatory five-day waiting period on gun purchases, but it took the Senate years to pass it.

A different bill, which banned the manufacture, transfer, or possession of a semiautomatic assault weapon, was also signed into law in 1994 under the Violent Crime and Law Enforcement Act. Congress allowed the assault weapons ban to expire in 2004.

The constitutionality of the NICS has been challenged in the courts by the National Rifle Association for decades, which has weakened and reduced its reach and impact. States currently using NICS are California, Colorado, Connecticut, Delaware, District of Columbia, Nevada, New Jersey, New York, Oregon, Rhode Island, Vermont, Washington and New Mexico. The NICS contains a plethora of data which includes mental health histories that can prohibit certain individuals from purchasing a firearm.

Clifford Santillanes, a mental health counselor in Las Vegas, New Mexico, explains the relevance of mental health in the conversation around gun control. Santillanes also mentions the Extreme Risk Protection Orders that were signed by Gov. Michelle Lujan Grisham in 2020.

“It’s a place of mental instability in which the person believes they have to do something that alleviates the thoughts and feelings they are feeling at the moment,” Santillanes said. “There is a law here in New Mexico that if you know someone that is unstable, any one can get ahold of the authorities and have firearms removed from the person or people who have access to the weapons.” 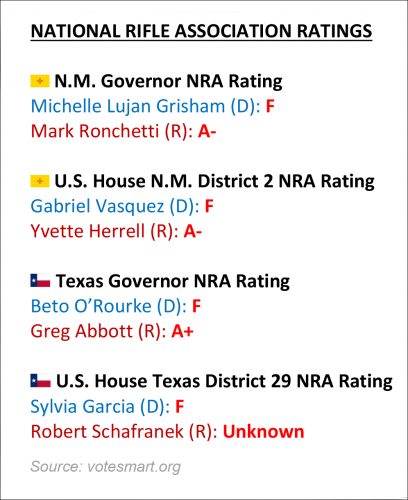 The Johns Hopkins Bloomberg School of Public Health reports that there are dangers from connecting mental health to gun violence. The Centers for Disease Control reports that “more than 50% of people will be diagnosed with a mental illness or disorder at some point in their lives.”

New Mexico has expanded gun safety efforts in recent years while its neighboring state, Texas, legalized open and concealed carry without a permit in 2021.

Everytown Research ranks New Mexico #16 in the country for gun law strength and expects to see reductions in gun violence as the impact of its new laws come into view. Senate Bill 8, signed by Gov. Lujan Grisham in 2019,  expanded required background checks on firearm purchases. The so-called “red flag” bill sparked controversy in 2020 as some voters prefer less restriction.

One former federal law enforcement official from New Mexico who asked not to be identified, shared a more bipartisan perspective on the issue, and suggested change begins at the local level.

“Both parties need to look at the pros and cons of why guns should and should not be owned,” they said. “How do you make those leaders and how do you make the government all the way up to the Supreme Court and the people accountable? You’re not going to start at the top because it just doesn’t work that way. In my mind you have to start at the bottom and have a grassroots movement.”

All voters are encouraged to consult votesmart.org in order to research candidates’ biographies, voting records, policy positions, ratings, speeches and funding. Votesmart.org is a nonpartisan organization. Its stated mission is “to provide free, factual, unbiased information on candidates and elected officials to all Americans.”

Hannah Hunter contributed to this report.