The NMSU Philharmonic Orchestra has announced it will be hosting the Southwest Honor Orchestra Festival after a two-year hiatus. The free concert festival will be held at the Atkinson Recital Hall on Feb. 25-27.

The NMSU music faculty and Philharmonic will kick off the event with their string sectionals at 1 p.m., Feb. 25. The Classical Jam Concert will start at 7:30 p.m., Feb. 26, and the final concert will conclude the festival at noon, Feb. 27. 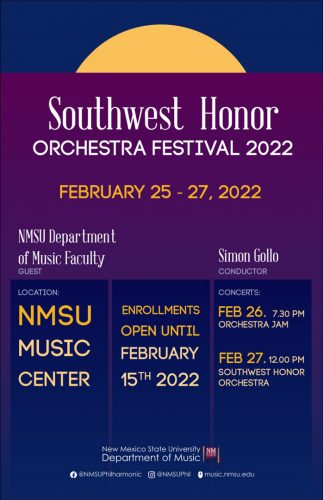 Ana María Quintero, the assistant concertmaster of the Midland-Odessa Symphony and Chorale, will also make an appearance as well as several violinists from the Simón Bolivar Symphony Orchestra of Venezuela.

“We will have about, I would say, 60 young musicians from the state which is very successful after a pandemic, and very successful when you think that a few years earlier, these numbers were by half,” said Simón Gollo, NMSU Philharmonic Orchestra conductor.

Gollo founded Las Cruces Youth Orchestras and Choirs, a preparatory program of the NMSU Department of Music. He started playing the violin at the age of five and has since then performed in 27 countries.

The NMSU music faculty has partnered with volunteer programs from all over the country including LCYO and El Sistema USA. Las Cruces Youth Orchestra and Choirs has also recently received a donation that Gollo said will greatly contribute to local musicians.

“This is very exciting to see that our orchestra program is growing and connecting with the community and region,” he said.

For Gollo, the Southwest Honor Orchestra Festival is more than just a festival. He defined it as more of a project with a vision that Las Cruces should be a central area for music, especially for orchestras.

With the ongoing COVID-19 pandemic in the United States, he did not seem too devastated from the impact of the virus and found it was a good opportunity for the music department to reconnect with local orchestra instructors and directors, emphasizing the importance of being patient.

“The pandemic has been just a difficult time,” Gollo said, “but also it was a very good time to think, ‘How can we do better? How can we provide better opportunities to our young musicians in Las Cruces?'”

Enrollment for local violinists closed Feb. 15. No audition was required. However, a $40 fee and an orchestra director recommendation were required to join the festival. The NMSU Philharmonic Orchestra is currently accepting admissions from anyone in the region.

While Gollo said no one is required to be a music major or minor to join the orchestra, he also explained the NMSU Philharmonic currently prefers to look for younger musicians first. He further said his team is currently connecting with local orchestra directors.